Do you remember the London Olympics ?
The hype ? The exhiliation ? Super Saturday ?

My wife and I were lucky enough to get tickets for the Gymnastics on Day 1 at the O2 (or whatever it was called then). We had watched the opening ceremony until silly o’clock the night before and at 7am stumbled onto a train into London.

You could sense the atmosphere on a train packed with people, which probably was far fuller than an early morning train on a Saturday in late July. We were greeted in London with the purples, and pinks, the banners, the helpers … and had a great time.

But enough of me.. what has that got to do with chocolate wrapping ? 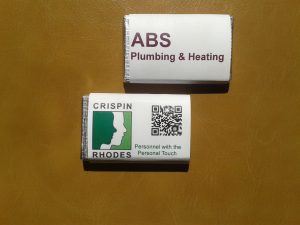 Well during that Olympic fortnight, I offered a small number of my 10g bars FREE to anyone who had never had them. Free P&P as well. I had requests from up and down the land (no idea why?), and the attached photo are two of those customers who saw the unique value in promotional chocolates and have ordered many time since.